Given the dimensions of the individual paddles of 60mm x 2.54mm x 2520mm and the dimensions of the photo multiplier tube (PMT) including necessary magnetic shielding it is necessary to have light guides. Further arguments for the use of light guides are the rectangular shape of the paddle cross section versus the round shape of the PMT entrance window that does not favor a direct coupling of the readout to the scintillator. In addition particles that pass very close to the end of the paddle would generate a disproportionate large signal in the PMT because of the highly non linear light absorption at short distances for short wave lengths (UV). The PMT H10534 is a 10 stage tube with a quoted 2 inch window. Measurements indicate a total diameter of the tube of 50mm. The H10534 is a full assembly including shielding and base as received from the manufacturer. At this point this assembly has an outer diameter of 60mm. Because of the expected high magnetic field in the region of the PMT of the order of 100 Gauss additional iron shielding is necessary. At this point a total outer diameter including such a shielding is estimated to be of the order of 66mm. As a consequence this dimension becomes larger than the paddle height of 60mm requiring the light guide to be bend in order the provide enough space to tack the paddles on top of each other. 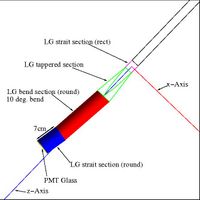 Magenta indicates the beginning of the light guide and the green part is the tapered section to move from a rectangular cross section to a round cross section. The red part is the bend of the circular part of 10 degree while the blue part is a strait section of cylinder 7cm long. The yellow part indicates the glass entrance window of the PMT.
In the following there are four links to pdf files for four different light guide configurations. 10 degree and 20 degree bend with short and long tapered sections. In all cases 1000 photons were generated in the scintillator section in 2pi and transported through the scintillator. At each interface to a new section of the light guide volume the photons were counted and plotted in a histogram. The ratio of histogram entries provide the information about who much loss is expected at each section and through the whole light guide.

The resulting numbers and ratios for the four tested configurations are shown below: