There is a recording of his meeting on the BlueJeans site. Use your JLab credentials to authenticate.

We went over the minutes from September 1.

Mark I. reviewed some of the points he made during his talk at the Open Science Grid All-Hands meeting a little over a week ago. The talk was meant to emphasize the relationship between the EIC and the OSG.

Sean led us through the first slide (see below) of his talk on future areas for data vs. Monte Carlo comparisons. He will give a complete presentation at next week's HDGeant4 Meeting. 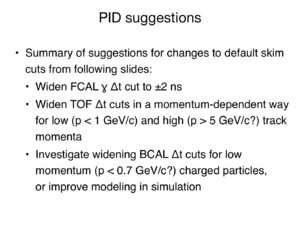 Thomas brought up a recent pull request to the halld_sim repository from Alex. This fixes a problem where simulation jobs can go into an infinite loop if the CCDB does not show any flux for a corresponding real data run. The change was made to the beam properties class.

Sean described his new wiki page, How to choose software versions on the MC submission form. This led to discussion on related topics.

Mark D. noted that when filling out the MCwrapper web form, it is hard to remember the "correct" responses, those that worked well in a previous project. Thomas pointed out a feature ("mod=2") where parameters from a previous project can be copied into a new form, with the exception of some fields that probably should not be re-used, such as the output file location.

Need for a New Version Set

Sean and Shankar pointed out that we are due for a new version set that incorporates recent improvements to several packages. Mark I. agreed to produce one.