There is a recording of this meeting on the BlueJeans site. Use your JLab credentials to get access.

Review of Minutes from the December 17 Meeting

We went over two of the issues.

Since the last meeting Alex has found much better agreement on ρ efficiency between G3 and G4 when the timing agreement requirement between charged track times, measured in the outer detectors, agrees with the RF time to within ±5 ns. The standard cut is ±1 ns. See the plots below. 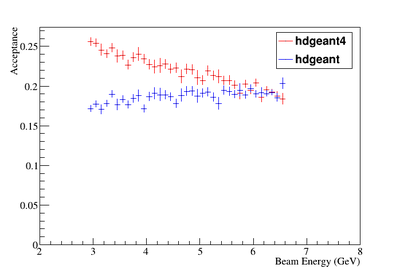 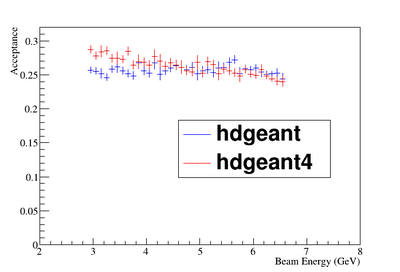 We focused on timing in the BCAL shown below. 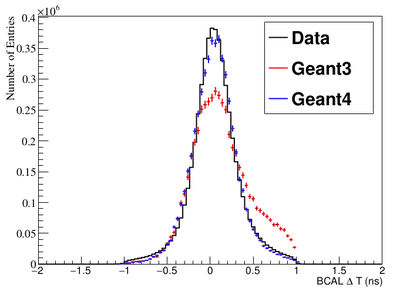 The high side tail of the G3 distribution is cut off by the timing cut (there is a resolution effect in the cut), consistent with different efficiency for different timing cuts.

Justin pointed out that the picture is a bit different for Colin's analysis as presented in Issue #111 for π+s from the reaction γp→π-ηΔ++, Δ++→π+p. Here G3 seems to agree with data better. See below: 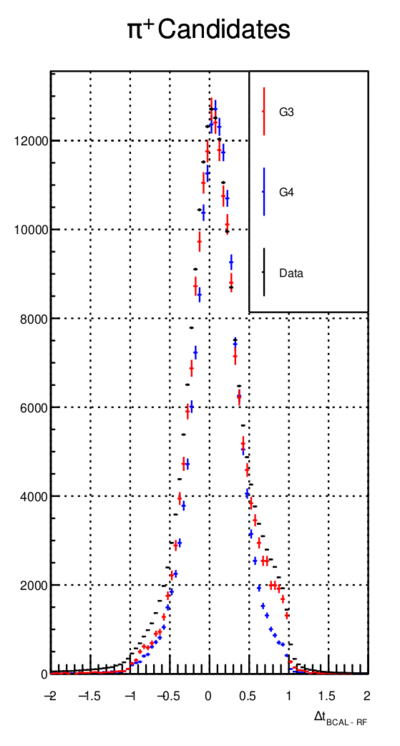 BCAL timing for π+ from Colin.

Alex and Colin agreed to study this effect with a single particle gun simulation over appropriate angles and momenta.

Jon has done a photon gun study where he compares (a) G3 and G4 for a run before 40,000 and (b) simulations for different run numbers using G4 for both. For both scenarios he sees significant differences.

For the different run number scenario, Jon mentioned calibrations as a possible cause and Sean also suggested a detailed comparison of the constants involved. Sean pointed out the BCAL saturation tables may not be doing the same thing for all run numbers. He also pointed out that the BCAL is the only system that produces digi hits which means a lot more has to go into mcsmear since all effects for which corrections are applied to real data need to be incorporated into the smearing as well and constants supplied to take them out in reconstruction.

The difference between G3 and G4 for the same run number is puzzling. Jon will try to repeat that comparison for a high run number.

Jon has looked at pull distributions for photons in several reactions and sees pretty good agreement between data and G4 bggen. We did not have time to go through his slides, but hopefully will next time.