There is a recording of this meeting. Log into the BlueJeans site first to gain access (use your JLab credentials).

We went over the minutes from the meeting on March 16. Mark pointed out that Alex highlighted his exploitation of AmpTools ability to use GPUs in his talk at the recent Exotic Search Review. Thomas reported that the purchase order for the new farm nodes, including those with GPUs on-board, has been signed.

Minutes from the Last HDGeant4 Meeting

We went over the minutes from the meeting on March 23. There was some sentiment for closing the issue of drift distances in the FDC, but we did not reach a firm decision about where to continue discussion of agreement with data.

Thomas reported on a recent fix to a problem that has been with us for over a year with job submission to the OSG. There had been a cap imposed on the number of idle jobs at 1,000 when job execution ground to a halt back then due to a large number of such jobs. The root problem was not understood. Recently the cap was listed and for a period three weeks ago the number of CLAS12 jobs in the idle state ballooned to 70,000. All monitoring and job progress stopped and responses to queries to Condor would not return. Thomas traced the problem to the jobs writing their Condor logs to volatile, generating many small disk accesses to Lustre and rendering the system unresponsive. All jobs going from the JLab submit host (scosg16.jlab.org) were affected. The solution was to dismount all Lustre disk systems from scosg16.

Things are fine now, but there is a backlog of GlueX jobs that are still working their way through the system.

Mark reminded us where some of the existing documentation on our test procedures resides, linked from the Offline Software wiki page. He also went the through the list of items we discussed at the Software Meeting on February 2. We a bit of an inconclusive discussion on how to make progress on the quality and quantity of our testing regime. Mark suggested a meeting of a small group of us to frame the issue. Justin cautioned us there there was a lot on our plate with the upcoming APS Meeting and that a portion of a Software Meeting after the Meeting might be a good place to come up with a plan.

Mark called out attention to halld_sim Issue #190, Run-to-run efficiency variation in 2018 run periods", will be discussed at tomorrow's Production and Analysis meeting, so we did not discuss it directly.

On a related point Justin mentioned that there were several recent changes that should get done before new Monte Carlo is produced.

The Work Disk is Full

Simon broke the news to us. The proximate cause is the mysterious fluctuation of our quota on the disk server. See the red points in the plot below: 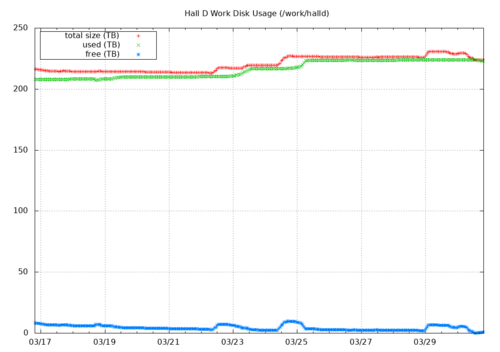