There is a recording of his meeting on the BlueJeans site. Use your JLab credentials to access it.

We went over the minutes from December 10.

Review of Minutes from the Last HDGeant4 Meeting

We went over the minutes from the meeting on December 17. Alex has done work exploring the effect of widening the timing cuts on charged hadrons which hit the BCAL. See the discussion below in the section on halld_recon pull requests.

The reboot of the work disk server, done on December 17, seems to have fixed the file locking problems we have been experiencing for months now. Brad Sawatzky from Hall C also reports success with his builds, builds that would reliably fail in the recent past.

Getting all of the Halls to agree to bring the disk down took some convincing given that any benefit was speculative. Kurt Strosahl of SciComp did see some anomalies while doing some pre-reboot diagnostics. There is no proof that the fix is permanent; we will have to continue to monitor the server.

Report from the Last SciComp Meeting

Mark led us through his notes from the meeting on December 19.

Mark I. highlighted Sean Dobb's recent fix for anomalies found in the raw data from last Fall. Naomi pointed out that there are actually three such anomalies related to the the new firmware used in the Flash-250s. David addressed one of them in halld_recon Pull Request #247

Mark D. has compiled a collection of information on this and related issues.

[Added in press: Mark D. reports that currently all FADCs are running with the latest version of the firmware (Version C13).]

In December, several folks reported anomalies in how gxproj accounts were being scheduled on the JLab farm. Starting yesterday, a new Slurm configuration for farm job priorities was rolled out. Priorities are assigned in a hierarchy such that resources at each level are apportioned according to "shares," and groups that are inactive at any given time have their shares apportioned among the active groups. The following figure shows the hierarchy and the current share assignments. 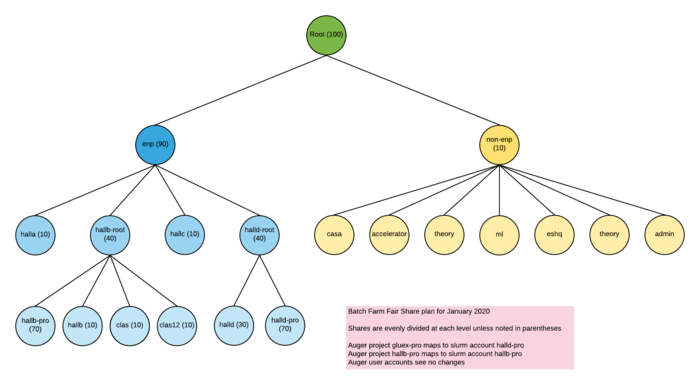 N.B.: Production accounts must use the the "gluex-pro" project to the the benefit if increased priority.

Teaching schedules have changed. We will move this meeting and the HDGeant4 meeting time to 3:30 pm. They will remain on Tuesdays.