Talks can be deposited in the directory /group/halld/www/halldweb/html/talks/2014-2Q on the JLab CUE. This directory is accessible from the web at https://halldweb.jlab.org/talks/2014-2Q/ .

Review of Minutes from the Last Meeting

We looked over the minutes from March 19. Sean has done some work wrapping HDDM calls for use with Python[?], as part of exploring the use of EventStore.

We also looked over these minutes as well. Some of Mark's comments (see below) addressed issues raised last Friday. 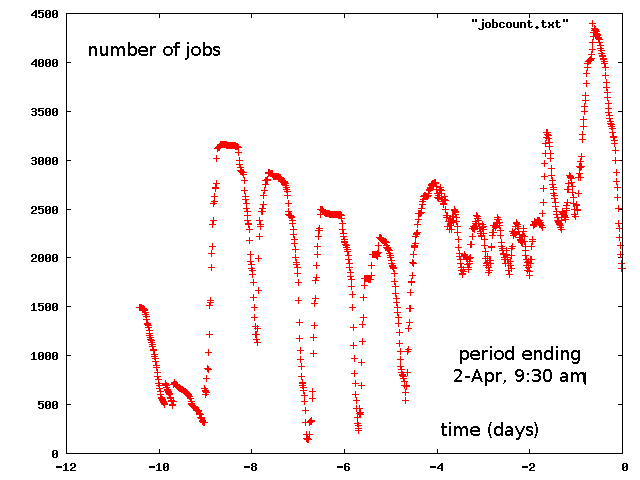 We have borrowed another 1000 cores from the LQCD farm, bringing our share up to about 4000 cores. This last slug came in over the last couple of days.

The large fluctuations are due to the fact that the farm scheduler cannot take into account usage by a user until the end of jobs. At start-up, if jobs take 24 hours to run (as these do), then during that initial period usage from those jobs is assumed to be zero. Also during this period, the user is boosted in priority in order to make up for lack of usage in the recent past. After the jobs complete are done, and all of that usage accounted for, the user appears to be over quota and gets turned off for a while, and so on. This turns out to be completely normal behavior for the system given long-standing parameter settings.

Mark led us through his wiki page, commenting on three topics:

We had a brief discussion on how long we should be using the nodes we have borrowed from LQCD. We still have a substantial balance on the amount owed to Physics from the December-March loan to LQCD. Curtis pointed out that we have already hit a 4500 job milestone, exceeded the benchmark of 1250 cores that had been set for us. Mark pointed out that the cores are all doing useful work. The OSG "site" has not come online yet. Given that the OSG contributed 80% of the cycles for the last data challenge it is hard so say where we are now.

We did not come to firm decision but will have to revisit this every few days or so. For now we continue to run with the 4000 total cores.

We remarked that numerical differences observed are truly in the round-off error regime. We also thought it was odd that identical runs at IU and CMU should differ by as much as 1% in file size. Progress from this point looks difficult given the small differences being reported. Kei will continue his studies.

We agreed to meet again on Friday to update tallies and discuss schedule.