There is a recording of this meeting. Log into the BlueJeans site first to gain access (use your JLab credentials).

Review of minutes from the last meeting

We went over the minutes from the meeting on October 6th.

Beni remarked on the changes in the monitoring plots for the current run after the magnetic field was turned on. 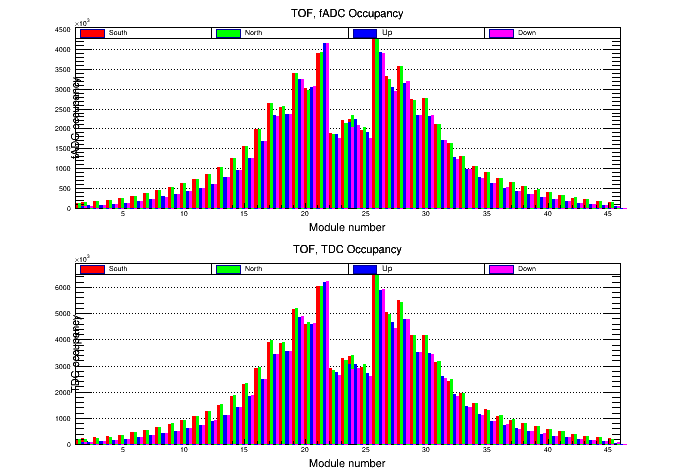 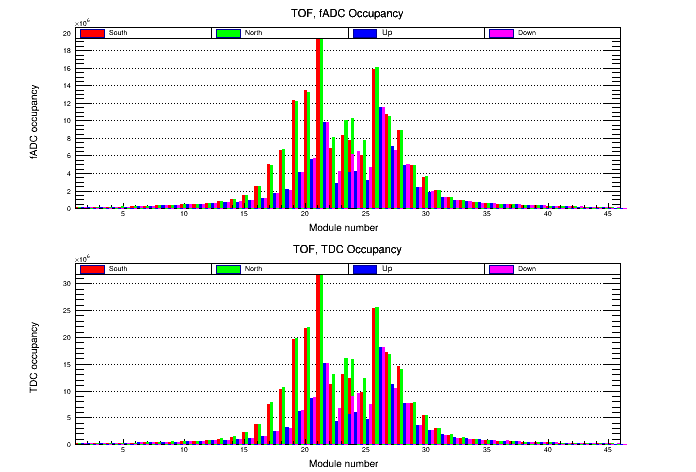 The "before" plots are much more symmetric, left-right, up-down, and front-layer-back-layer. Beni remember that this effect is also seen in the distribution of charged tracks around the beam line.

We could not recall exactly when the acrylic shield for the inner TOF was removed; that may have had an effect. Eugene mentioned that high TOF rate near the beamline may have an effect on the current η reconstruction efficiency since the TOF is used as a veto for photons. Here the acrylic shield may help. Beni also noted that there is a big rate difference in the TOF depending on whether the target is full or empty.

Beni is planning a study of the observed asymmetries using scalar records from the EPICS Archiver.

Beni reported that the TOF gains have dropped a bit during the course of the current run.

He is going to get back in touch with Jackson Pybus. The TOF calibration has been streamlined to make it easier to hand off.

Mark and Beni reported on the discussion at the CPP Meeting earlier today. Ilya has a plan for the test, but we have run out of time to execute it during the PrimEx run. The CPP group will try to get a short period of time for a test during SRC. Beni pointed out that since there is a lot of set-up to do, trigger-wise, for SRC, that the new TOF firmware might be made part of the plan, at least for very high-level tests (basic operation, i.e., no crashes).

Beni suggested that during the period where SRC is running with a series of thin carbon targets (8 of them, 2 mm thick each, equally spaced in z, spanning 21 cm in z) we might be able to reconstruct vertices and measure the beam angle, using a series of x-y measurements at several z-positions.