As mentioned before there is a problem with three channels on the shaper board - they show a 10x lower gain. Although it is not clear what is causing this Gerard will send a new board with a slightly different gain.

Kim told us she will send a 125 MHz clock to CMU earliest in the first week of March.

In this setup we will are reading out the trigger using one channel of the fADCs. The block pulse coming out of the coincidence unit is attenuated and shaped (against jitter) using a device Gerard gave us. Out of this signal a differential signal is made using another device (also from Gerard). This signal is injected in the shaper board and then read out by the fADC. The real trigger (a NIM signal going to the STOP input on the fADC) is basically the delayed output from the coincidence unit.

A straight line is fit to the rising edge of the trigger signal and the zero crossing (in ns) is dumped into the histogram shown in figure 3.1. 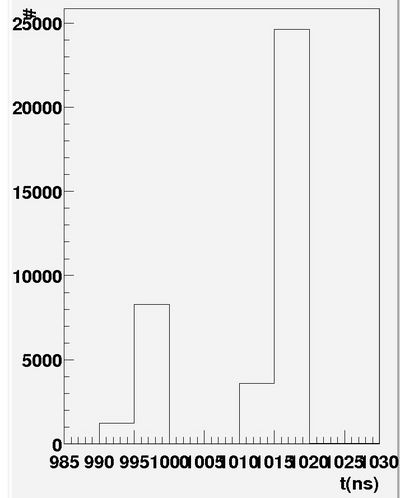 One can see too peaks that are 20 ns away from each other. The early peak contains almost 1/3 of the events. For now we do not worry too much because we have other problems.

There is a problem with the (minimum) drift time spectra we have for a while. A GARFIELD simulation told us that the maximum drift time is 200 ns. In figure 4.1 on the left side 4 drift time spectra are shown (4 different channels). Two features are not understood: 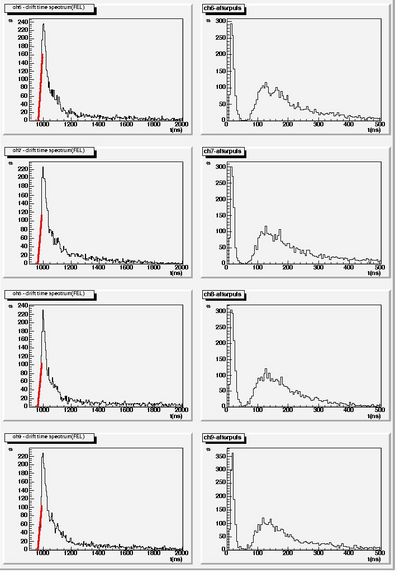 All previous data was taken with cosmic rays going through the middle of the straws. Let's see what happens if we move the trigger scintillators to the end (or beginning) of the straws and remake figure 4.1. This is shown in figure 4.2. 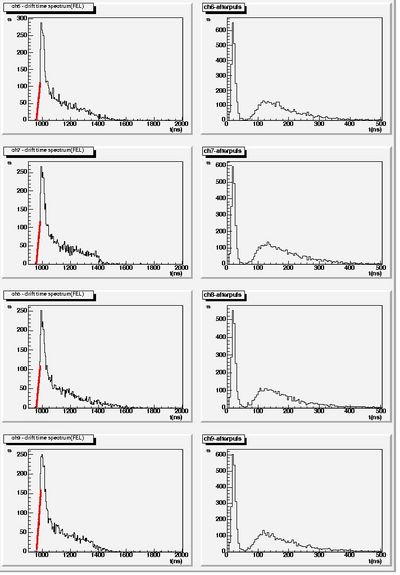 There is a difference: there is a hard cut-off - it comes 200 ns too late but it is there. This might be due to a change of the wire position (straw moved or string tension decreased). After measuring the position of the straws it turned out that several tubes were up to 4 mm below where they should be (half the radius). However, several layers appear to have no sag. This is not understood because all tubes seem to show similar behavior. The sagging tubes have been moved up by adding support and we are taking data again.

The spike in the beginning is still not understood + the the fact that the drift time spectra is now twice as long as it should be. So some parts on the to do list are now: