Talks can be deposited in the directory /group/halld/www/halldweb/html/talks/2016 on the JLab CUE. This directory is accessible from the web at https://halldweb.jlab.org/talks/2016/ .

There is a recording of this meeting on the BlueJeans site.

Review of minutes from the previous meeting

We skimmed the minutes from June 28.

Beni described his write-up (previously this section was in the agenda section of this page).

So there is both a severe rate dependence and long-term degradation of the gain. Sasha noted that the beginnings of this effect was visible in the Spring 2015 data.

Sasha put together a histogram of the current HV settings: 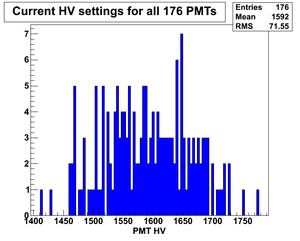